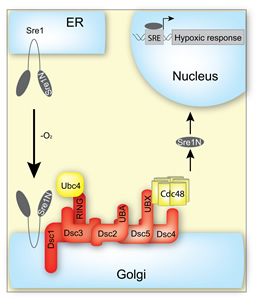 Maintenance of lipid homeostasis is essential for cell survival, and disruptions to lipid homeostasis lead to heart disease and non-alcoholic fatty liver disease. A family of membrane-bound transcription factors, called Sterol Regulatory Element-Binding Proteins (SREBPs), regulates synthesis of cholesterol, fatty acids, and triglycerides. SREBP activation requires SREBP Cleavage Activating Protein (SCAP) that escorts SREBP from the ER-to-Golgi where SREBP is cleaved by Golgi proteases. SCAP then recycles back to the ER for additional rounds of SREBP binding and transport. Multiple mechanisms control SREBP activity, and additional regulation undoubtedly exists. To better understand the SREBP pathway and control of lipid homeostasis, we are studying orthologs of SREBP and SCAP in the fission yeast Schizosaccharomyces pombe, called Sre1 and Scp1.

Our characterization of the fungal SREBP pathway revealed that Sre1 and Scp1 function in an oxygen-responsive pathway. Sre1-Scp1 respond to changes in oxygen-dependent sterol synthesis as an indirect measure of environmental oxygen. Under low oxygen, Sre1 activates a gene expression program that is essential for hypoxic growth. Activation of Sre1 by low oxygen requires processing of this transcription factor in the Golgi through the action of the multi-subunit Golgi Dsc E3 ligase. 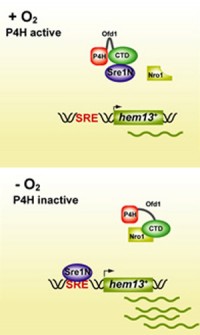 In our studies of yeast SREBP, we discovered that oxygen regulates Sre1 at a second point through the oxygen-sensing, prolyl hydroxylase Ofd1 and its negative regulator Nro1. Ofd1-Nro1 control the oxygen-dependent stability and DNA binding of the active Sre1 N-terminal transcription that has been released from the membrane by proteolysis. Thus, an emerging research focus of the lab is to describe the multiple mechanisms that cells use to sense and respond to changes in oxygen supply. 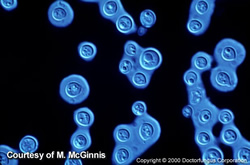 Pathogenic fungi cause disease in immunocompromised individuals. We extended our studies of Sre1 to the pathogenic basidiomycete, Cryptococcus neoformans in collaboration with Dr. June Kwon-Chung at the NIH. In this organism, Sre1 also controls adaptation to low oxygen and this gene expression program is required for virulence in a mouse model of infection. Others found identical results in studies with the fungal pathogen Aspergillus fumigatus. Interestingly, the fungal pathogen Candida albicans requires the SREBP CPH2 for host intestinal colonization, but not for low oxygen growth. These studies in pathogenic fungi identify the Sre1 pathway as a therapeutic target and suggest that SREBP inhibitors may have broad antifungal application.